Learned non-use is when an individual with a weaker arm can use it, however learns not to because it is easier to use their stronger arm. Constraint induced movement therapy is based on the theory that the affected limb may have a potential but unrealised ability to move due to reliance on the unaffected limb.

Hemiplegia, caused by a neurological event such as stroke or brain injury, is characterised by weakness affecting an arm and hand. In the initial period after injury the person tries to compensate for their weak arm by using their stronger arm more often and their weaker arm less. These individuals often ‘forget’ how to use their affected arm and learn new behaviours with their stronger arm. Often this persists over time and the weaker arm becomes neglected. This is known as learned non-use.

Learned non-use is not necessarily permanent and reversal is possible with intense treatment of the weaker arm; this is the key component of constraint induced movement therapy. Restraining the stronger arm whilst undergoing constraint induced movement therapy encourages the person to use their weaker arm in situations where they may have previously used their stronger arm entirely. With the sole focus on the weaker arm and positive reinforcement by the therapist, the person’s motivation to use their arm increases allowing function to improve. This concept is described as overcoming learned non-use. 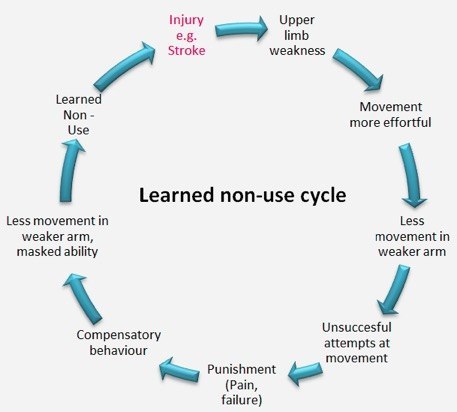 Using constraint induced movement therapy to treat hemiplegia in the arm and hand can help to overcome learned non-use, and improve the amount and quality of use of the arm. People who have participated in CIMT programmes have reported that they made a significant difference to their recovery and overall quality of life.