There is a “map” of your entire body across the part of your brain called the cortex. The sizes of different body parts on the map depend on how much they are used – for example the hands, eyes, lips and tongue are all much bigger on the map because these parts of the body are used most for sensation and function. 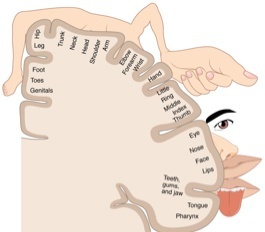 Scientists found that this map is constantly changing according to how you use your body. For example, braille readers have much bigger fingertips because they use them so much more, and violin players have larger left hands because they are used to play the instrument.

When a part of the body is used less, such as an arm and hand affected by a stroke or brain injury, its representation on the brain will shrink. Studies have scanned people after stroke or injury to the brain and found their affected side has become much smaller on the cortex compared to their unaffected side. If that person has learned non-use of the arm, they will continue not to use it and it will never regain its true representation on their brain.

Intensive training of the upper limb during constraint induced movement therapy re-wires brain activity and increases the representation of the upper limb in the brain. Constraint induced movement therapy has been shown to stimulate the brain to form new connections and grow new neurones, this is called cortical reorganisation – quite simply “rewiring the brain”.

Constraint induced movement therapy has been shown to increase the size of the affected arm on the brain. The increase in size has remained when followed up 6 months later. So CIMT affects not just the physical arm and hand, but actually causes cortical reorganisation in the brain that lasts. It is the changes to the brain that allow for the improvements with CIMT to continue long after the treatment has completed.